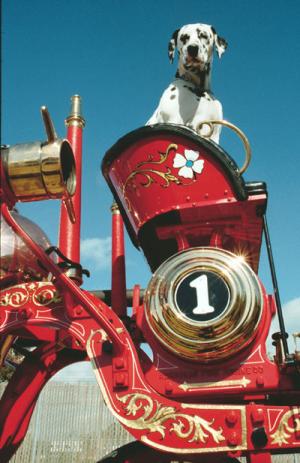 Today the Dalmatian serves as a firehouse mascot, but back in the days of horse drawn fire carts and engines they provided a valuable service. Dalmatians and horses are very compatible, so the dogs were easily trained to run in front of the engines to help clear a path and guide the horses and the firefighters to the fires quickly. They are still chosen by many fire fighters as pets in honor of their heroism in the past.

Dalmatians have been used throughout history for serious work. They have been sentinels on the borders of their homeland of Dalmatia and Croatia during wars. They worked as shepherds, as draft dogs, as hound dogs, as hunting dogs, as retrievers and as performing dogs. Dalmatians are not only intelligent, but they also have excellent memories. Their speed, endurance and lack of a fear for horses, enabled them to become superb coach dogs for the horses and the engines.

Dalmatians first known as "coach dogs" were first used in the 17th, 18th and 19th. century in England, Scotland and Wales. Wealthy aristocrats sought out the unusual looking spotted dog for use with their coaches. They are very physical, strong, muscular, and able to run long distances. They would run along side the coach or just behind the rear of the horses. These eye-catching canines lent an air of superiority to the coaches of the wealthy as they traveled through the villages. The dogs were an important part of any stable that housed teams of pulling horses. A stable dog has a calming effect on the horses and makes them feel comfortable in their stalls. Many of the dogs were said to have lived right in the same stalls as the horses.

Horses are gregarious and feel the need for company. The dalmatians served this purpose. They would run along side the horses or under the axle of the coach and keep up with the team for as much as 20 - 30 miles per day. They would also help to clear the way for the team and keep other dogs from interfering with the horses.

Also, horse theft was so common back then that coach and stage coach drivers used the dogs as guards to protect the team and the luggage in the coach. 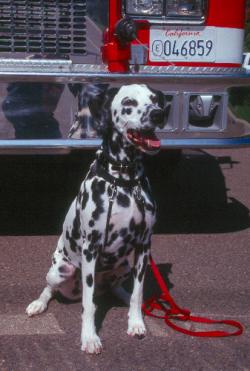 The dogs were first used in the fire service when most fire companies were volunteer or privately operated. There was some competition for services. Some of the firefighters were actually recruited not only for their strength in fighting fire but also for their fighting abilities to protect the company and its equipment. Insurance companies paid the fire company that put out the fire, so the one that made it to the scene, hooked up to a hydrant and completed the task, got paid. The dogs worked well at this task of protecting not only the horses, but the equipment in the stations and on the fire ground as well.

Early firefighters took tremendous pride in their companies. They would turn out and parade through the city at almost any occasion. Polished brass and brilliant paint schemes and the gleaming leather were always maintained. Just as the dalmatians worked with private coaches, they worked fire companies. When dalmatians appeared with the engines, people looked just as they did with the coaches in England.

The end of the era for Dalmatians as a coaching dogs for fire departments became about with the advent and introduction of motorized cars and fire engines. However, they are still on duty in many fire stations today acting as companions to the firefighters and as watchdogs’ protection the equipment! 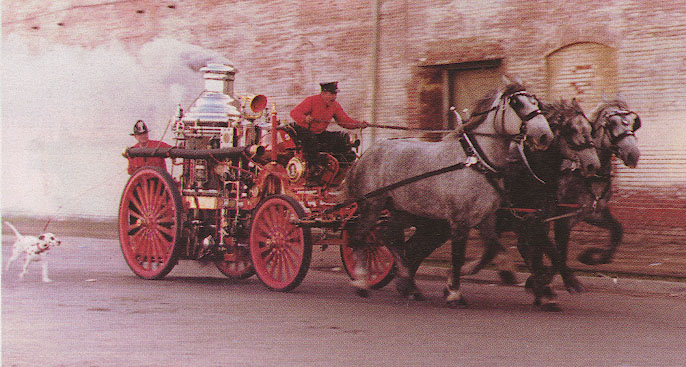 Dalmatians not only have spots on their coats,

but on their tongues and paws as well.