First attempts at firefighting can be traced as far back as the 2nd century. It was then that an Egyptian from Alexandria named Ctesibus built a basic hand pump that could squirt a jet of water, but the idea was lost until the fire pump was reinvented about AD 1500. After nearly being destroyed by uncontrollable conflagrations, ancient Rome developed a fire department consisting of approximately 7,000 paid firefighters. These fire brigades not only responded to and fight fires, but also patrolled the streets with the authority to impose corporal punishment upon those who violated fire prevention codes.

The first recorded structure fire in the United States occurred in 1608 in the colony of Jamestown. On January 7, a fire leveled most of the fragile colony which was just barely a year old. Captain John Smith wrote of the fire in his journal: "Most of our apparel, lodging and private provisions were destroyed, I begin to think that it is safer for me to dwell in the wild Indian country than in this stockade, where fools accidentally discharge their muskets and others burn down their homes at night." Things haven’t changed much.

In the early days, most fire companies were volunteer or privately operated. There was some competition for services. Some of the firefighters were actually recruited not only for their strength in fighting fire but also for their fighting abilities to protect the company and its equipment. Insurance companies paid the fire company that put out the fire, so the one that made it to the scene, hooked up to a hydrant and completed the task, got paid. The dogs worked well at this task of protecting not only the horses, but the equipment in the stations and on the fire ground as well. Fire fighting equipment in the colonies was rudimentary at best. Leather buckets, hooks and chains, swabs, ladders, and archaic pumps were the tools of the trade in the early days.

Fire buckets in colonial towns had the owners names painted on them. Laws often required residents to purchase them and keep them in repair. In the 1680s, in New York, the number of buckets a home or business needed was determined by the risk of fire. A baker must have three buckets and a brewer had to have six buckets on hand in case of fire. “Bucket Brigades” were used commonly which consisted of two lines of people stretching from the town well to the fire. They passed buckets of water to the fire, and empty buckets back to the well to be refilled. Later, with the invention of the hand pumper, bucket brigades were used to keep the pumper full of water. Hooks and chains were used to make firebreaks by pulling down walls of burning buildings to keep the fire from spreading. Swabs (mops) were used to extinguish embers on thatched roofs. Fire fighting got an edge with the invention of the hand pumper, or Hand tub. The Foreman of the pump companies would use a large "speaking trumpet" to give orders to and urge his crew on.

Fire prevention in the United States was born in 1630 in Boston. The Boston selectmen ordered, "noe man shall build his chimney with wood, nor cover his house with thatch." In 1648, Governor Peter Stuyvesant of New Amsterdam (New York City) was the first in the New World to appoint fire inspectors with the authority to impose fines for fire code violations. When a fire was spotted, the cry "throw out your buckets" would be sounded, and a bucket brigade would be formed. Many homes burnt to the ground.

London suffered a catastrophic fire in the year 1666. The only equipment available to fight the London fire consisted of two-quart hand syringes and a similar, slightly larger syringe; it burned for four days. The London fire stimulated the development of a two-person operated piston pump on wheels. About 1672 leather hose and couplings for joining lengths together were produced; though leather hose had to be sewn like a fine boot, fabric and rubber-treated hose did not come into general use until 1870. In 1679, Boston imported the first fire engine to reach America from London.

In 1736 young Benjamin Franklin, already one of the most influential men in Pennsylvania, began urging readers of his "Pennsylvanian Gazette" to establish fire-fighting companies. Soon, six volunteer corps were established in Philadelphia. In 1752, insurance companies in the colonies began issuing plaques, or "fire marks," to be prominently displayed on building fronts as an incentive for volunteer fire fighters to save their insured buildings. These fire marks are extremely rare these days as most of them were made of lead and were melted to make ammunition for the Revolutionary War. With bonuses offered as incentives, rivalries ensued between groups. Marked homes and businesses were brawled over, while residences on the same street, with no fire mark, often burned to the ground.

A festive occasion for firemen was the annual town parade, where each party, dressed in colorful uniforms, would march down the main street. Here too, companies sought to outdo each other. Lavish helmets and uniforms, fancy fire axes, decorative parade torches, hand painted stovepipe-shaped "fire hats," fancy painted fire buckets, and engraved silver speaking trumpets were commissioned for these parades. The speaking trumpets were sometimes used for shouting insults at rival parties. If they had a hand pumper, it was decorated too, often by celebrated artists.

In 1852 William F. Channing, a Doctor in Boston used telegraph technology developed in the early 1840's to create the first fire alarm box system. Later that year Boston had fire alarm boxes all over the city. The first box was struck on April 29 of that same year.

In 1832, the New York Mutual Hook and Ladder Company No. 1 volunteers purchased a horse to pull their engine. One of the reasons may have been due to a shortage of firefighters caused by a yellow fever epidemic. It may have been simply that they were tired of pulling the heavy apparatus themselves. Regardless of the reason, the idea caught on fast. Before long, horses became a beloved part of the fire service all over the country. The horses were often trained to the sound of the bell to get out of their stalls and stand at the front of the apparatus, usually with the help of the firehouse dog, the Dalmatian. 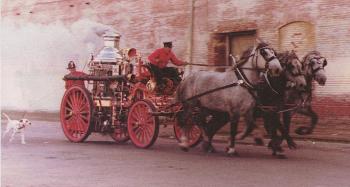 Dalmatians were originally chosen as firedogs because they formed a strong bond with the fire horses. They guarded the valuable equine and kept them company in the station. Often, at the sound of the bell, the Dalmatian would rouse the horses, and then run out to the apron to bark at people trying to cross in front of the firehouse. They would then chase the fire apparatus to the scene. The end of the era for Dalmatians as a coaching dog for fire departments became about the advent and introduction of motorized cars and fire engines. However, they are still on duty in many fire stations today acting as companions to the firefighters and as watchdogs’ protection the equipment.

The horses used to pull the heavy steamers in Boston were suffering from equine influenza, which resulted in the Great Fire of Boston in 1872. The firefighters had to struggle to pull the heavy steamers themselves through the narrow, winding streets of Boston to the fire. It was reported that “the fire assumed fearful proportions within 15 minutes” of being detected. 13 people were killed, nine of them fire fighters. Not long after, steam powered and then gasoline-powered fire fighting apparatus were put into service, in 1923, on a Monday morning in Chicago on February 6. Fire alarm box 846 at State and Chicago Avenue was pulled at 12:40 p.m. With the horses scrubbed and groomed, the old steamer rolled out of the swinging doors at Fire Engine 11 for the last time. Buck, Beauty, Dan and Teddy galloped out of the fire station at 10 E. Hubbard St. with their coach and the fire fighters riding on the engine. They were led by their Dalmatian escort to a False Alarm. It was their last response. The alarm was pulled at a box at Chicago Avenue and State Street as part of a planned event to mark the retirement of the horse drawn engines and fire fighting equipment in the City of Chicago. It was the first department in the United States with more than 500,000 residences to serve, to become completely motorized.

Gasoline engines were at first used either as pumping engines or as tractors to pull apparatus. In 1910 the two functions were combined, one engine both propelling the truck and driving the pump. Modern equipment is usually diesel powered, and multiple variations of the basic fire engine enable firefighters to respond to many types of emergency situations.